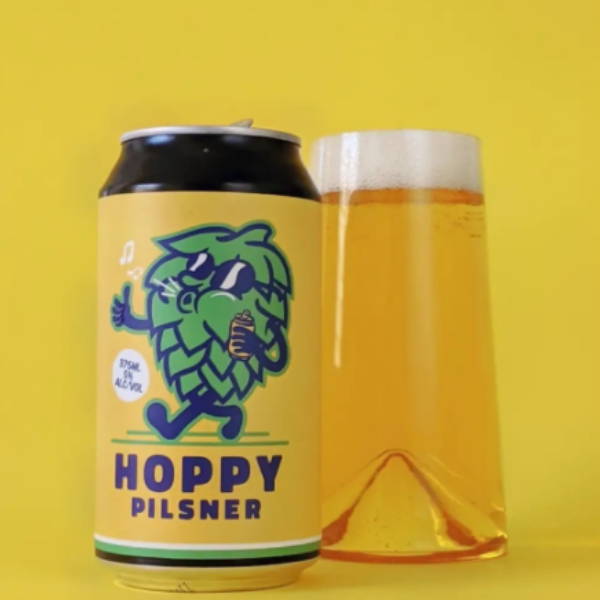 And they do love Lagers. Since founding Hargreaves Hill in Victoria’s Yarra Valley in 2004, Simon Walkenhorst and Beth Williams’s brewery has explored many classic styles, and more experimental expressions via the Beatnik range, but one beer has remained a best seller.

Pilsner lays claim to being the original hoppy Lager. The style was created in 1842 by Josef Groll in Pilsen, Czech Republic and carries a slightly fuller body than its German sibling which arrived shortly after – both are synonymous with Hallertau, Saaz, Spalt, and Tettnang ‘Noble’ hops.

In recent years, the craft beer world has been largely occupied with hoppy IPAs and Hazy beers, however there has been a quiet resurgence of well-made Lagers, including the Italian Pilsener movement, essentially a heavy Noble hopped Pilsner.

The collaborators have taken this idea and applied a modern Citra hop extension as Hargreaves Hill’s Andrew Pretty explains.

"We wanted to create a super smashable, crisp Pilsner that had all of the hop characteristics of an IPA without the bitterness and ABV"

"For our second collaboration with Hops to Home we wanted to create a super smashable, crisp Pilsner that had all of the hop characteristics of an IPA without the bitterness and ABV”.

“To accomplish this, we used Citra in the whirlpool in large quantity and moderate dry hopped with Citra during ferment. Although extensive late dry hopping can create more aroma, it can also create an earthiness that we found undesirable for what we were trying to achieve. By dry hopping at the rate of a Pale Ale, instead of an IPA, we were able to achieve a great level of juiciness throughout the drinking experience while maintaining the smashable nature of Lagers that we all love"

Jessie Jungawalla from graphic design studio Craft Instinct provided the care free, whistling hop icon, and says the inspiration was “sunny days combined with nostalgia for the past, the notion that yesterday was a simpler time than today - sipping to reminisce”

It’s something that drinkers can do while enjoying a light straw-coloured pour with firm bitterness, and Citra hops’ citrus and tropical influence darting through to the crisp, dry resolution.