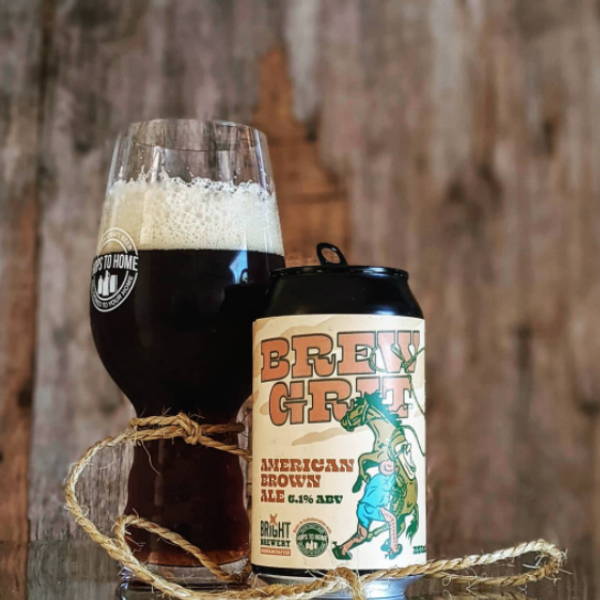 Founded in 2005 by Scott and Fiona Brandon, Bright Brewery lays claim to being one of the originators of Australia’s modern craft beer era. What began as small brewpub, located three and a half hours North East of Melbourne, has grown into an over 500-person capacity venue and production facility in the eponymous mountain town.

The region is famous for snow sports in Winter and mountain biking in Summer, as well as postcard perfect Autumn colours that draw photographers. It’s a source of inspiration for the brewery’s sustainability ethos which has recently seen a Paktech recycling initiative, solar powered brewing plus collaborations with Protect Our Winters Australia and RSPCA, to name a few.

Bright’s core range of five cans is complimented by over 25 limited releases each year, which now includes a collaboration with Hops To Home as the brewery’s National Sales Manager Evin Craney explains.

"In craft, we get so caught up with the Milkshakes, Hazys and barrel aged beers, but sometimes you just want to go back and drink a beer."

“In craft, we get so caught up with the Milkshakes, Hazys and barrel aged beers, but sometimes you just want to go back and drink a beer. So, we wanted to throw it back to an OG brew, and celebrate an often-forgotten gem of the craft beer world, the American Brown Ale. We also wanted to brew something with a bit more of a malt back bone and some classic American pine and grapefruit notes that suits the colder months”

“It’s a style that fell by the wayside, but we have much better access to brewing and hop technology now, so it’s going to surprise a lot of people”

Outside the can, Evin notes that Brew Grit’s label art was created by Pocket Beagles’ Clint Weaver, who also works on many of Bright’s releases.

“Since 2019, we’ve charged forward with new beer styles and Clint has fast become a huge part of the new identity of Bright Brewery with his highly recognised style of design taking over the Australian craft beer scene. He’s got a real feel for it, and it’s been able to help us to define our two beer ranges.”

“When we gave Clint the brief for this collaboration all we knew was that we wanted to celebrate a forgotten American style. Clint had a few ideas but the one that really stuck out was the quintessential cowboy”

ach month the Hops To Home pack features an exclusive collaboration beer with one of Australia’s best breweries. Read here to see some of the previous releases.